Last year, after being inspired by an amazing food tour I experienced in Colorado Springs, I decided to create one for the town I live in, Loveland, Colorado. On the first tour that I created, downtown restaurants served up everything from Korean beef tacos to chicken and andouille gumbo.

Nearly a year later, I want to introduce visitors and locals to four more downtown eateries including the new kid on the block and a 51-year-old Loveland restaurant.

The following tour is just a suggested outline and can be modified it to fit your needs.

This tour agenda is for two people and should take two to three hours. All restaurants in this do-it-yourself food tour are within just a five to ten minute walk of one another.

Without a doubt, this is the place to have a martini in downtown Loveland, and Generations serves up inspired food too. 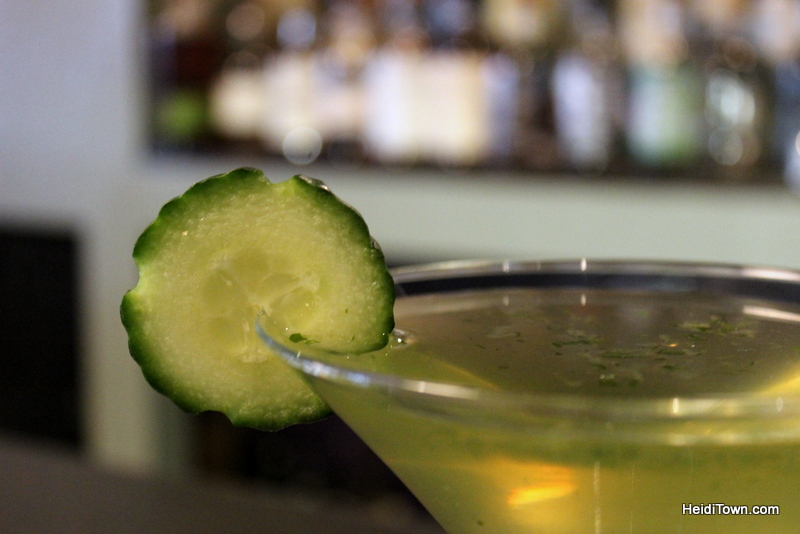 On a rainy Friday afternoon, the small restaurant was hopping. Their daily happy hour, which includes both food and drink specials from 3 p.m. to 5 p.m., is a big draw.

When in Rome, one does as the Romans do, so Ryan and I ordered martinis; a Nolet’s Dry Gin martini with blue cheese stuffed olives for me and the cucumber martini with Loveland’s Spring 44 vodka for Ryan. They did not disappoint.

We paired our cocktails with my favorite item at Generations and one of their most popular — the bacon-wrapped dates ($5.50 during happy hour). 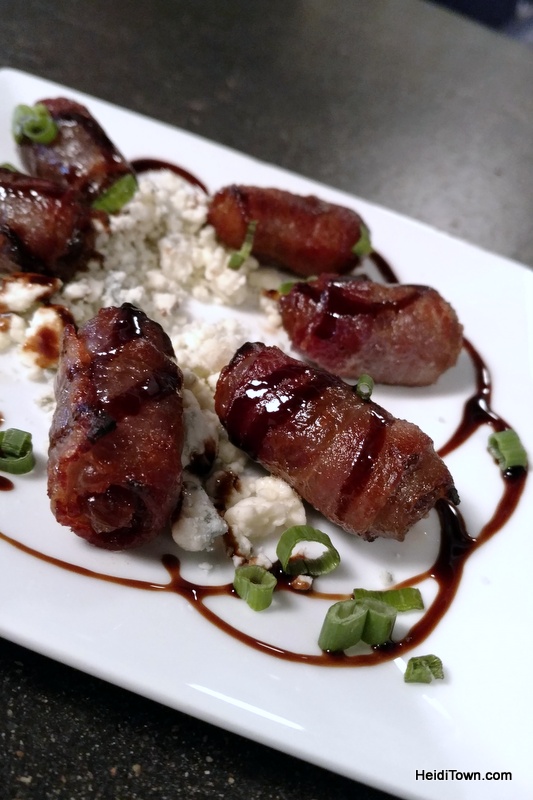 For brunch lovers, Generations has a fantastic weekend brunch that features a bottomless bloody Mary bar.

This has become my go-to happy hour spot in downtown Loveland, not only for the $4 house wine and cozy bar but for their tasty appetizers. 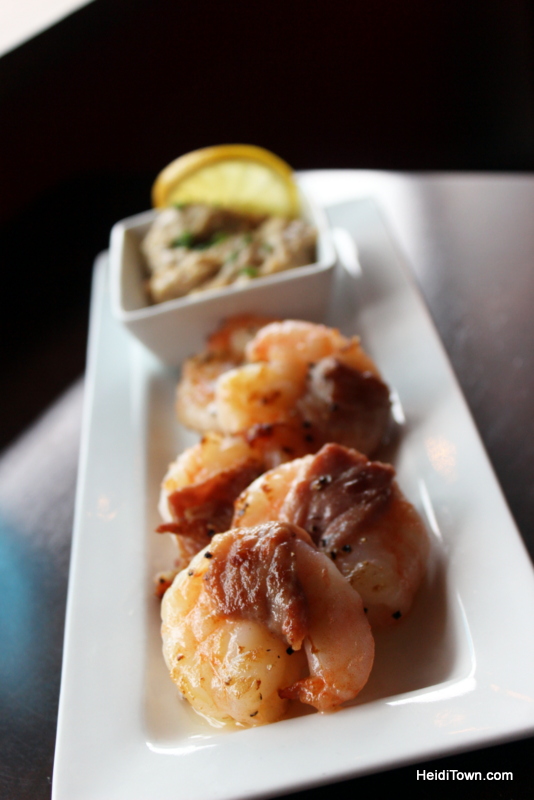 Slate serves traditional Italian entrees such as carbonara and bolognese, but Ryan and I were looking to share another appetizer and while we love the Cheese Slate ($11/$9 during HH), it’s too much food for a food tour outing. We opted for the prosciutto shrimp ($8/$6 during HH) that features white shrimp wrapped in prosciutto de Parma and served with a garlic butter sauce. It’s divine.

If you’d rather not have two “bacon” wrapped items at your first two stops on this Loveland Food Tour, Slate’s bruschetta ($9/$7 during HH) with Genoa salami, chevre, fennel, olive oil and a balsamic reduction is a delicious alternative.

A Loveland tradition since 1966, the Black Steer is quintessential Colorado. From the wood paneled walls to the comfy booths, this place is a throwback that Loveland locals truly love. 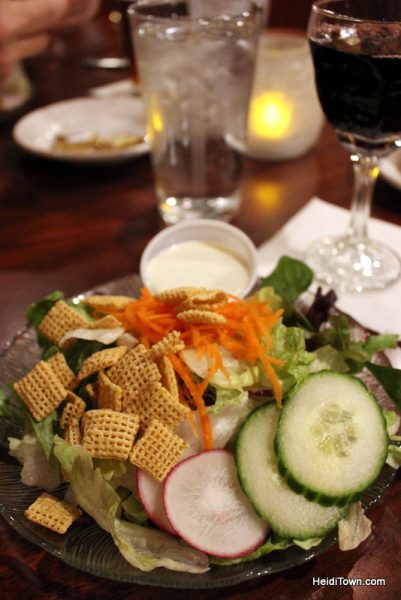 One simply cannot do a food tour stop at the Black Steer Steakhouse and not order steak, but after our first two stops, how could we both eat a full steak dinner? The good news is that this steakhouse allows split plates at no additional charge.

We ordered the Petite Pepper Steak ($18.50), which comes with a choice of side and the Black Steer’s famous, and substantial, side salad sprinkled with Chex Mix instead of croutons. Take it from me, Chex Mix on a salad is yummy.

A place that’s been serving up steaks for this long should know what they are doing and the cooks at the Black Steer certainly do. Our steak arrived a perfect medium rare and we tucked into it with the zeal of two people who hadn’t just split two appetizers. 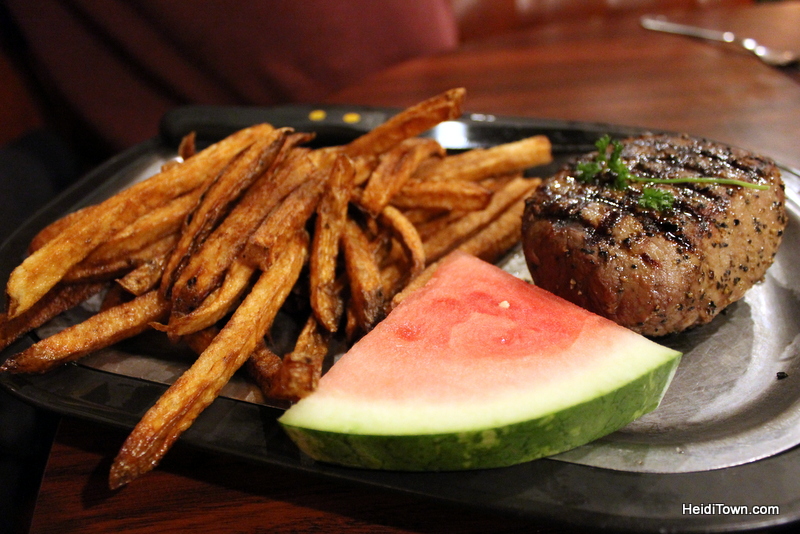 While our waitress Diane, who’s been at the Black Steer since 1997, tried to tempt us with a peanut butter pie, we had had to decline because our final stop specializes in desserts.

Open just six months, Starlight Dessert Bar & Bakery was a new stop for both of us. At Starlight you can drink your dessert or eat it with a fork. The Salted Caramel Brownie may sound like a fork-type of dessert, but it’s actually a milk, caramel, vodka and chocolate liqueur drink.

Owner Renee, who grew up in Loveland, has had a longtime wish to open a dessert restaurant in Loveland and her dream has come to fruition. 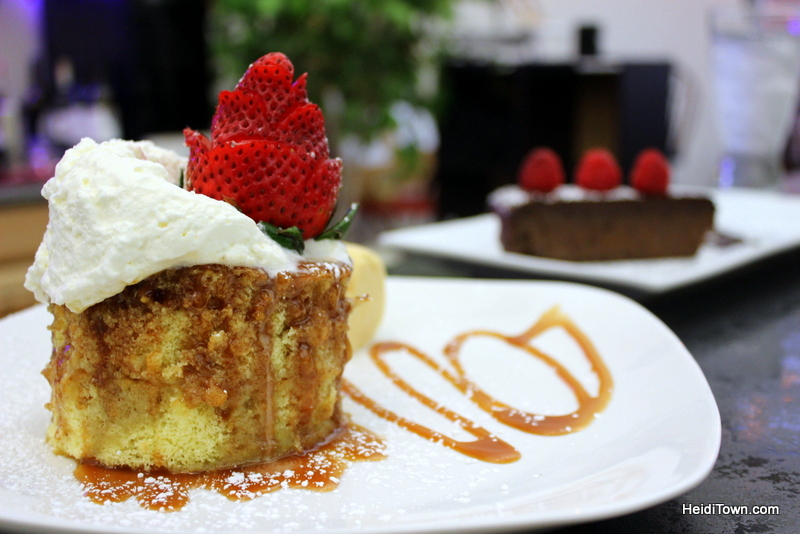 We had intended to share a dessert, but pastry chef Meghann served us a bourbon bread and butter pudding and the velvet chocolate torte with a red wine and clove reduction.

These two desserts rivaled anything we’ve had at fancy Denver dessert bars (and we’ve been to a few). This is, without a doubt, a gem in downtown Loveland both for visitors and locals to discover.

In addition to their incredible selection of desserts and bakery items, Starlight serves up light fare such as soup and sandwiches. They frequently have live music in the evenings making it the perfect after dinner stop or date night destination.

This do-it-yourself Loveland Food Tour was designed and taste-tested by Heidi Kerr-Schlaefer. The featured restaurants were chosen by Heidi and agreed to be featured in this piece.