Tangible – Magic You Can Get Your Hands On

An event every 2 weeks that begins at 8:00pm on Thursday, happening 4 times 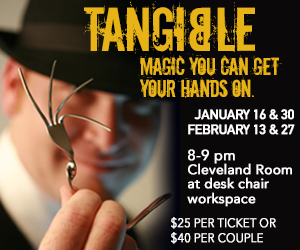 Bring on the magic and illusion with desk chairs four-part magic series named Tangible, kicking off on January 16th.

For the past four years, Magician Daniel Jaspersen has been performing this set of magic exclusively at high-end private house parties. When working for millionaires, the magic must be smart, solid, sophisticated, and a ton of fun. Tangible was born out of a desire for the audience to be deeply engaged in the action, not simply watching. Together the magician and guests get their hands dirty in this intimate magic show.

For nearly 15 years Daniel has been performing for Fortune 500 companies including Google, Hitachi, Harley Davidson, Kohl’s, and the United States Air Force. In the region, Daniel has been featured at TEDxFrontRange, CSU, The Broadmoor, and private parties throughout the Front Range.